Nicholas Fokine began his ballet training with the renowned Olga Kostritzky at the School of American Ballet. The school is affiliated withNew York City Ballet and that association gave him many opportunities to perform with the company.  He danced in their Nutcracker, Swan Lake, Songs of the Auvergne, and Romeo and Juliet.  A performance of Romeo and Juliet, in which he was a featured dancing minstrel, was broadcast on Live from Lincoln Center.  While studying at SAB and the Miami City Ballet School he performed at their workshops in the ballets Harlequinade, Tombeau de Couperin, as the ‘Waltz Boy’ in Serenade and as the ‘Bluebird’ in Sleeping Beauty.

He was interviewed about Nutcracker fora segment of the ABC news magazine 20/20 and was interviewed about his heritage for an article in The New York Times.  Nicholas Fokine is the great-grandson of the choreographer Michel Fokine.  In 2005, he had the opportunity to perform with American Ballet Theater in Petrouchka, one of his great-grandfather’s most famous works. Before joining Carolina Ballet, Nicholas was an apprentice with Miami City Ballet. 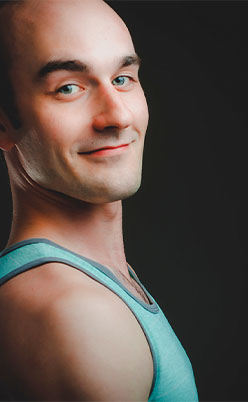