“Whether ballet classes lead to a professional career or not, each child deserves a well-considered, positive training curriculum led by intelligent, committed teachers. The child that gets good training in the early years develops the foundation for a strong and balanced body, self-discipline, and inner confidence. Any goal can be reached when built on these qualities.”

Ann Vorus, Founder, The Raleigh School of Ballet and Raleigh Dance Theatre
In 1981 Ms Vorus, former soloist with Atlanta Ballet, rented a small space to teach two classes, one for six children and another for six adults. Later that year she moved the growing classes to a larger space on St. Mary’s Street and in 1982 moved once again into a even larger space on Hillsborough Street. By 1983 seventy students were enrolled in the school and a second studio and a performance training program were needed. Ms. Vorus knocked a wall out connecting to a space next door and incorporated Raleigh Dance Theatre. Taking no pay for herself, all money coming in from the classes went straight back out for rent, additional teachers, and accompanists.

In 1987 the school and company moved into a two-studio space built for dance by local realtor Thom Williams. Two years later Ms. Vorus bought property on Beryl Road and in the fall of 1991 completed the building that still houses the school and company. Studio One was built to the measurements of the the Raleigh Memorial Auditorium’s stage where in 1991 Raleigh Dance Theatre performed Giselle with the North Carolina Symphony in it’s inaugural ballet series.

In Ms Vorus’ opinion the true gift to the school and its history is the quality of the teachers who want to work with her. “One teacher cannot a dancer make,” she said as she embraced one after another of the highly qualified people that applied to teach. Of the many fine teachers who came, some remain today on the faculty either as teachers or directors. Three became the heart and life-force of the growing school and company. From this family of teachers grew well-trained, dedicated dancers who were accepted into dance companies around the world including New York City Ballet, Carolina Ballet, Pennsylvania Ballet, Aspen/ Santa Fe Ballet, National Ballet of Flanders and Stuttgart Ballet In the summer of 1990 Mary LeGere, former soloist of Pennsylvania Ballet, joined the faculty. Having worked with many teachers and choreographers, her well-rounded training, matched Ms. Vorus’ background. Ms. LeGere quickly became associate director of the company and since 1994 has led the performance training program taking Raleigh Dance Theatre into professional status as Carolina Ballet while keeping the company in place as the training program for the school. Ms. LeGere is still a member of the faculty and in 2003 became one of the school’s directors.

In 1991 Susan Carlin Galdy moved to Raleigh from New York City and joined the faculty of the school. Ms. Galdy had the unique opportunity to train for many years under renowned master teachers Finis Jhung and David Howard. She received her BFA from SUNY Purchase where she began her studies in pedagogy, composition and modern dance. In 1999 Ms. Galdy became associate director of the school and became school director upon Ms. Vorus’s retirement.

With the support of The Raleigh School of Ballet faculty, staff, and committed parents, Ms. Vorus was able to fulfill her goals for the school. Her first goal was to train students capable of performing the classic ballet Giselle.. The second was to become a member of the Southeastern Regional Ballet Association where Raleigh Dance Theatre is an Honor Company. Her third dream was to have the company reach a level of proficiency to perform a Balanchine ballet. In 1996 the company performed Raymonda Variations, which was staged by Robert Barnett, formerly a dancer with Balanchine and Ms. Vorus’ director at Atlanta Ballet.

Having reached her goals and having wonderful people in place to carry the school into the future, Ms. Vorus retired in the spring of 2003. She lives with her husband Jackson Parkhurst on the top of a mountain near Brevard, North Carolina which is close enough for her to visit Raleigh and teach a guest class.

For 30 years The Raleigh School of Ballet has been training dancers. The directors and faculty are proud to continue the tradition of educating dancers in a nurturing and caring environment. 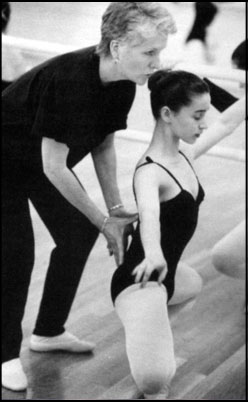 "I am grateful for all the knowledge and patience from all the teachers at RSB and thank them for my success as a dancer. I am especially thankful to Ms. Vorus for believing in me as an aspiring teacher. I know I would never have received a chance to teach, which has become my heart, had it not been for her!"